Memorial Day in the USA is a day to remember those who served their country.  In war and conflict many of them gave their lives for the cause of what they believed was just and right.

The Civil War or War Between The States or North and South brought the horror of war into every corner of a nation divided.  Many young and old men on both sides died or suffered from their wounds in the years which passed. 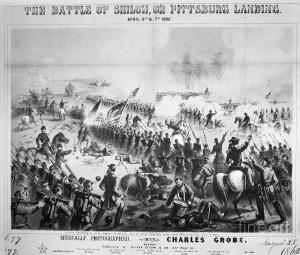 Over the field in clouded days,

Over the field where April rain

Solaced the parched ones stretched in pain

Through the pause of night

That followed the Sunday fight

Around the church of Shiloh—

The church so lone, the log-built one,

That echoed to many a parting groan

Of dying foemen mingled there—

Foemen at morn, but friends at eve—

Fame or country least their care:

But now they lie low,

While over them the swallows skim,

And all is hushed at Shiloh.

Taking a moment or a few to remember and to pay respect to those who gave their all in the service of their country is a tribute to those brave souls who lie in marked and unmarked graves across the battlefields of this planet traversing the cosmos. For them all is hushed from the sound and fury of strife and the vicissitudes of fate.

It is the living who can remember.  Let not their ultimate sacrifice be forgotten with the passing of time.

NOTE: All photos except the Battle of Shiloh are copyrighted by G D Williams.  They may be used if credit is given to the Loch Garry Blog.  Thank you.

The Sacrifice of One

Each Memorial Day, our nation pauses to reflect on those who have died in service to our country. And behind each sacrifice, lies a person who gave up their special moments in life so that we could enjoy ours. (Also includes a text-free version.) “Mansions of the Lord” is performed by the United States Military Academy Glee Club and can be found on the album, “Stand Ye Steady: Songs of Inspiration and Courage.”

Originally known as Decoration Day, it originated in the years following the Civil War and became an official federal holiday in 1971. Many Americans observe Memorial Day by visiting cemeteries or memorials, holding family gatherings and participating in parades. Unofficially, it marks the beginning of the summer season.

Memorial Day was born out of necessity. After the American Civil War, a battered United States was faced with the task of burying and honoring the 600,000 to 800,000 Union and Confederate soldiers who had died in the single bloodiest military conflict in American history. The first national commemoration of Memorial Day was held in Arlington National Cemetery on May 30, 1868, where both Union and Confederate soldiers are buried.

The race track in question was the Washington Race Course and Jockey Club in Charleston, South Carolina. In the late stages of the Civil War, the Confederate army transformed the formerly posh country club into a makeshift prison for Union captives. More than 260 Union soldiers died from disease and exposure while being held in the race track’s open-air infield. Their bodies were hastily buried in a mass grave behind the grandstands.

When Charleston fell and Confederate troops evacuated the badly damaged city, freed slaves remained. One of the first things those emancipated men and women did was to give the fallen Union prisoners a proper burial. They exhumed the mass grave and reinterred the bodies in a new cemetery with a tall whitewashed fence inscribed with the words: “Martyrs of the Race Course.”

And then on May 1, 1865, something even more extraordinary happened. According to two reports that Blight found in The New York Tribune and The Charleston Courier, a crowd of 10,000 people, mostly freed slaves with some white missionaries, staged a parade around the race track. Three thousand black schoolchildren carried bouquets of flowers and sang “John Brown’s Body.” Members of the famed 54th Massachusetts and other black Union regiments were in attendance and performed double-time marches. Black ministers recited verses from the Bible.

In 1864, women from Boalsburg, Pennsylvania, put flowers on the graves of their fallen soldiers from the just-fought Battle of Gettysburg. The next year, a group of women decorated the graves of soldiers buried in a Vicksburg, Mississippi, cemetery.

In April 1866, women from Columbus, Mississippi, laid flowers on the graves of both Union and Confederate soldiers. In the same month, in Carbondale, Illinois, 219 Civil War veterans marched through town in memory of the fallen to Woodlawn Cemetery, where Union hero Major General John A. Logan delivered the principal address. The ceremony gave Carbondale its claim to the first organized, community-wide Memorial Day observance.

Waterloo, New York began holding an annual community service on May 5, 1866. Although many towns claimed the title, it was Waterloo that won congressional recognition as the “Birthplace of Memorial Day.”

HEADQUARTERS GRAND ARMY OF THE REPUBLIC
General Orders No.11, WASHINGTON, D.C., May 5, 1868

1. The 30th day of May, 1868, is designated for the purpose of strewing with flowers or otherwise decorating the graves of comrades who died in defense of their country during the late rebellion, and whose bodies now lie in almost every city, village, and hamlet church-yard in the land. In this observance no form of ceremony is prescribed, but posts and comrades will in their own way arrange such fitting services and testimonials of respect as circumstances may permit.

We are organized, comrades, as our regulations tell us, for the purpose among other things, “of preserving and strengthening those kind and fraternal feelings which have bound together the soldiers, sailors, and marines who united to suppress the late rebellion.” What can aid more to assure this result than cherishing tenderly the memory of our heroic dead, who made their breasts a barricade between our country and its foes? Their soldier lives were the reveille of freedom to a race in chains, and their deaths the tattoo of rebellious tyranny in arms. We should guard their graves with sacred vigilance. All that the consecrated wealth and taste of the nation can add to their adornment and security is but a fitting tribute to the memory of her slain defenders. Let no wanton foot tread rudely on such hallowed grounds. Let pleasant paths invite the coming and going of reverent visitors and fond mourners. Let no vandalism of avarice or neglect, no ravages of time testify to the present or to the coming generations that we have forgotten as a people the cost of a free and undivided republic.

If other eyes grow dull, other hands slack, and other hearts cold in the solemn trust, ours shall keep it well as long as the light and warmth of life remain to us.

Let us, then, at the time appointed gather around their sacred remains and garland the passionless mounds above them with the choicest flowers of spring-time; let us raise above them the dear old flag they saved from hishonor; let us in this solemn presence renew our pledges to aid and assist those whom they have left among us a sacred charge upon a nation’s gratitude, the soldier’s and sailor’s widow and orphan.

2. It is the purpose of the Commander-in-Chief to inaugurate this observance with the hope that it will be kept up from year to year, while a survivor of the war remains to honor the memory of his departed comrades. He earnestly desires the public press to lend its friendly aid in bringing to the notice of comrades in all parts of the country in time for simultaneous compliance therewith.

3. Department commanders will use efforts to make this order effective.