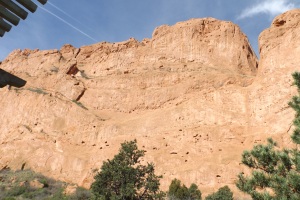 In 2018 I visited a place which is as ancient as time.  It was there before the first humans cast their gaze upon it.

It was the natural habitat of the soaring birds, buzzing insects, and small and large creatures.  It was a place where the winds could chase each other as the silent monuments stood erect unaffected by the playfulness of life around them. 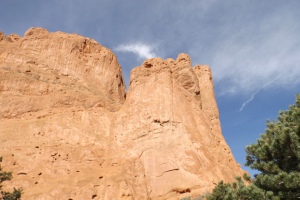 The Garden of the Gods in Colorado is in many ways an environs where the magical and mystical of yesterday and today coalesce in a beauty unparalleled by anything that humans could build or conceive.  It is understandable that the ancients viewed it as an astral plane where the gods touch the Earth.

Walking among these stone wonders is like indulging in Shinrin-yoku.  The Japanese term refers to spending time in nature, especially a forest ambiance, but spending time in the Garden of the Gods would be a corollary to “forest bathing”.

The Garden of the Gods may not be the empyreal Eden of the distant past, but in its majestic uniqueness it speaks of an Edenic experience. In many ways, if one allows the place to bathe their senses and wash away preconceived notions, one can have a spiritual experience like the ones who first saw these marvels of stone.

These stone giants tower above you as you walk among them.  One can faintly comprehend how little we know of the wonders of this planet traversing the cosmos.

Mysteries are part of our human experience.  Spend time in nature and bask in her creative wonders.

Perhaps, those whispers of the past will embrace you.  Their song in the cosmic ocean will be carried by the earth winds for you to contemplate in this holy place. 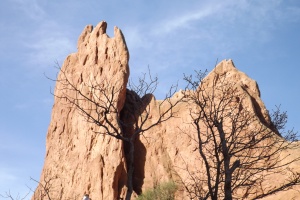 NOTE: All photos are copyrighted by G D Williams.  They may be used if credit is given to the Loch Garry Blog.  Thank you.

The Garden of the Gods

Shinrin-yoku is a term that means “taking in the forest atmosphere” or “forest bathing.” It was developed in Japan during the 1980s and has become a cornerstone of preventive health care and healing in Japanese medicine. Researchers primarily in Japan and South Korea have established a robust body of scientific literature on the health benefits of spending time under the canopy of a living forest. Now their research is helping to establish shinrin-yoku and forest therapy throughout the world.

The idea is simple: if a person simply visits a natural area and walks in a relaxed way there are calming, rejuvenating and restorative benefits to be achieved.

Forest baths are gentle walks that support well-being through sensory immersion in forests and other naturally healing environments.