Recently I was in Dodge City, Kansas—USA.  As we drove into the western city, on a hill stood ten dark silhouettes on horses against the cloudy cerulean sky. 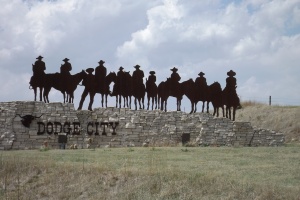 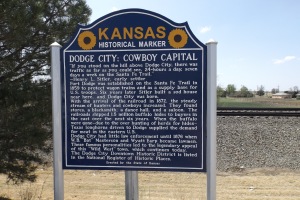 One could not escape its historical western roots as you drove through the city or walked its sidewalks; its history was blazing like the noonday sun before a showdown at high noon.  History was everywhere. 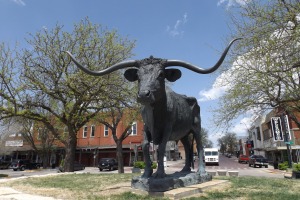 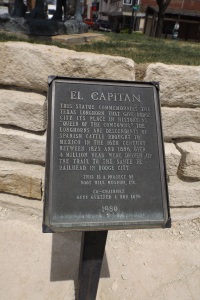 Like the old saying goes “without friends or money” these unknown souls for the most part found their final fortune in the soil covering their remains.  The reason it was called Boot Hill was the custom of burying the deceased with their boots on or behind their heads—perhaps as a testament to their need of these boots for whatever life may have awaited them in the western vistas of the great beyond.

As the town grew, these interred men and woman were moved in 1878 to the new cemetery: Prairie Grove. Currently Boot Hill is the site of the Boot Hill Distillery.  Perhaps, it’s a fitting tribute to the legacy of such an infamous place of American western lore. 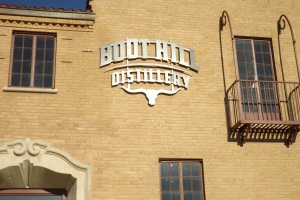 Janet Zoble’s statute of John Henry “Doc” Holliday symbolizes many western motifs.  The gambler, the saloon–“joint”, the whiskey–watered down or private stock, the cards and of course the hoisted pistol or knife which could be drawn at any moment, especially if a player (a “tenderfoot”–novice to western life; a cowboy–the trail riders who carried a taint of notoriety; or “stinker”–a buffalo hunter) was caught cheating or engaged in a verbal confrontation with another player.  Whiskey and cards were a deadly combination when firearms came into play. 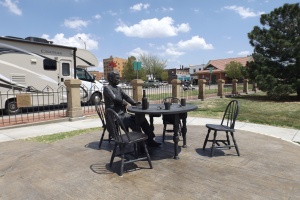 The sculpture depicts the loneliness of life on the frontier.  In many ways the solitary figure at the card table paints in realistic tones the life, the short life, of many who traversed the cowtowns of the West.

Death from an illness like consumption (tuberculous) or a gunshot was commonplace.  The murder of a young woman would be etched forever with Dodge City’s tawdry history.

“Saint or sinner, Dora Hand was the most graciously beautiful woman to reach the camp in the heyday of its iniquity. By night she was the Queen of the Fairy Belles, as old Dodge City termed its dance-hall women, entertaining drunken cowhands after all the fashions that her calling demanded. By day, she was the Lady Bountiful of prairie settlement, a demurely clad, generous woman to whom no appeal would go unheeded.”  https://truewestmagazine.com/dora-hand/

Dora was murdered by James Walworth “Spike” Kenedy, son of wealthy Mifflin Kenedy—of the Laureles Ranch located in Texas.  Spike’s intended target was James “Dog” Kelley, but his bullet on that sable October night in 1878 struck Dora, who was asleep in Kelley’s house.

The famous chase of Spike became legend. Charlie Bassett, William Duffey, Wyatt Earp, Bat Masterson and Bill Tilghman hunted Spike down before he reached his father’s ranch and powerful influence.  The trial in Dodge City was a farce in Judge R. G. Cook’s court where it was reported that $25,000 from Mifflin Kenedy was used to free his wayward son who had lost the use of his left arm from the rifleshot by Bat Masterson.  http://www.historynet.com/the-killing-of-dora-hand.htm

Justice would be done for Dora six years later.  The wayward Spike Kenedy never saw his thirtieth birthday.  He died December 29, 1884 from consumption and pneumonia.

Peace Officers were not immune to deadly force in Dodge City back then or now. 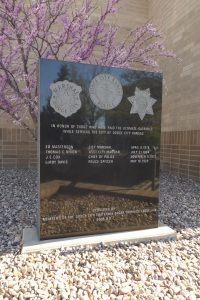 On April 9, 1878 Ed Masterson, City Marshal and older brother of Bat, was murdered by a drunken Texas trail hand.  The boys from the Texas cattle ranches left their indelible mark on the Queen of the Cowtowns.

The names of the saloons on Front Street have been mythicized by the fascination with the American West.  The Alamo, Alhambra, Lone Star, Nueces, and of course the most famous—the Long Branch.

Anyone who ever watched or watches the television series of Gunsmoke will know that the Long Branch Saloon was the setting for both serious and bantered conversations between Matt, Doc, Kitty, Chester and Festus, with Sam the patient bartender always ready to pull the loaded gun from under the bar when trouble arose.  No western series would be complete without the town drunk—Louie Pheeters.  The series ran twenty years, and the actors are remembered in Dodge City.

Today Dodge City is a “quiet town” of about 28,000.  The Excel Corporation during its six-day week processes 6,000 cattle daily.  National Beef processes 4,000 cattle a day.  Each day over 1,000 semi-trucks visit this western Kansas community.

Of course, tourists come to town to see the place of American romance and lore.  Definitely, if you can visit Dodge City, it’s worth the trip. 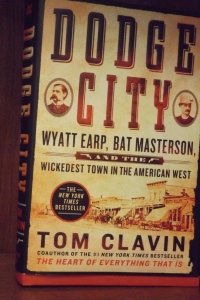 After returning home, I purchased Tom Clavin’s Dodge City, Wyatt Earp, Bat Masterson, And THE Wickedest Town in the American West. I highly recommend this fascinating 384 page book about the Old West. It has “a lot of good stories”, especially if one imagines sitting under the Western night sky with a roaring fire while enjoying the discourses of the past.

For the voices of the American West still can be heard.  Fact and legend and myth are all rolled into one colossal American tale.

“This is the West, Sir.  When legend becomes fact, print the legend.”  The Man Who Shot Liberty Valance, John Ford 1962 film 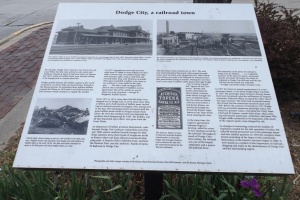 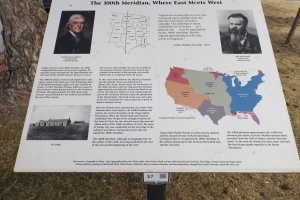 All pictures are from my collection.  They may be used freely if credit is given to Lochgarry Blog.