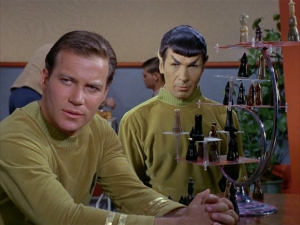 “Captain’s Log, stardate 9529.1. This is the final cruise of the Starship Enterprise under my command. This ship and her history will shortly become the care of another crew. To them and their posterity will we commit our future. They will continue the voyages we have begun, and journey to all the undiscovered countries, boldly going where no man… where no one has gone before.”  James T. Kirk, Star Trek: The Undiscovered Country

As we count down to the 50th Anniversary of Star Trek, there is a growing unrest among the fans.  If this were Star Wars, it would be seen as a disturbance in the force, but Star Trek and Star Wars are two separate entities with their own perspective on cosmic realities.

The unrest among fans, especially fans of the fan-based series, are over the new guidelines for fan-produced films.  Here’s the link to the official Star Trek site: http://www.startrek.com/article/star-trek-fan-film-guidelines-announced

In reading the comments on this official site and other sites devoted to Star Trek, fans are frustrated and angry over these guidelines. A number of commentators referred to them as “draconian”, “Rura Penthe”,  “not logical”, “ludicrous”, “blind as Tiberian bats”, “bash capitalism”,  “harsh limitations”, “nonsense”, “excessive”, “laughable and insulting”, “a puerile act of revenge”, etc.

To be honest I was looking forward to Axanar and Captain Pike.  I have watched Star Trek: New Voyages or Phase II, Star Trek: Renegades, Star Trek: Continues, etc.

The latest episode from Star Trek: Continues—“Come Not Between The Dragons” was one of the best creative pieces of fan devotion to Star Trek.

It was a great episode.  It was much better than some things on the networks with big budgets and insipid writing.

With Star Trek Beyond coming out in July and the new Star Trek series on CBS (have to pay to watch it) as well as the 50th Anniversary, it was not the best of times to rile up the fan base.  Of course Paramount/CBS are within their legal rights to require how their Star Trek cosmos should be depicted by fan productions.

The call for a boycott of the new film and series is a legitimate means for fans to sock it to Paramount/CBS.  This reactionary tactic might be more tempered by asking the corporate power brokers to reconsider these guidelines and find a working solution which was in place before Axanar went where no Trek fan production had gone before.

Is this just a tempest in a teapot which will eventually give a good cup of tea—Earl Grey? The existence of one bad tea bag in the box does not mean the whole box should be discarded. Time will tell.

From a business model it would seem to me that some financial arrangement could be made with the above-mentioned fan series which could benefit all parties.  Some of these fan productions are of superb quality which should be embraced by the powers that be.

One point needs serious consideration: in many ways Star Trek has outgrown the confines of the entertainment universe.  It is part of our culture, and culture is expressed by individuals in their own creative ways.

Culture is not owned by any one individual or corporation because we all share it, and in a very intrinsic way we all own it because we contribute to it.  We all make it what it is.

Like it or not—Star Trek 13 is coming in July whether you buy a ticket or not.

Here’s the latest trailers for Star Trek Beyond:

“Star Trek Beyond,” the highly anticipated next installment in the globally popular Star Trek franchise, created by Gene Roddenberry and reintroduced by J.J. Abrams in 2009, returns with director Justin Lin (“The Fast and the Furious” franchise) at the helm of this epic voyage of the U.S.S. Enterprise and her intrepid crew. In “Beyond,” the Enterprise crew explores the furthest reaches of uncharted space, where they encounter a mysterious new enemy who puts them and everything the Federation stands for to the test.”

What Are Intellectual Property Rights?

After Axanar’s $1 million fundraising goal put the fan film in CBS/Paramount crosshairs, the companies have now mandated that the production budget of fan films cannot exceed $50,000, that only amateur cast and crew can be used and the film can only be shared on “a no-charge basis.”

Even after Star Trek reboot directors J.J. Abrams and Justin Lin held peace talks in an effort to reconcile the franchises’ rightsholders and its fervent fan base, the legal battle between CBS/Paramount and Axanar producers continues on in court. However, in what could be epic trolling on the part of Axanar’s filmmakers, the film’s second trailer was unveiled the same day Star Trek imposed their new guidelines..
http://www.rollingstone.com/tv/news/paramount-cbs-establish-star-trek-fan-film-guidelines-20160624

The Star Trek fan film must be family-friendly and suitable for public display. The content should not include nudity, profanity, obscenity, drugs, alcohol, tobacco, harmful or illegal activity, and other offensive and inappropriate material. The content must not violate the right of privacy of any individual.

A disclaimer is also required in the on-screen credits and marketing materials. The creators must not register their projects and cannot create or imply any link or endorsement by CBS or Paramount Pictures.

Paramount Pictures and CBS provided the rules to prevent Star Trek fan filmmakers from being subjected to legal action. The two companies also reserved the right to amend or withdraw the guidelines at their discretion.

“These guidelines appear to have been tailor-made to shut down all of the major fan productions and stifle fandom,” executive producer Alec Peters said in a statement to TheWrap. “In no way can that be seen as supportive or encouraging, which is very disheartening.

“CBS has a long history of accepting fan films,” Peters said at the time. “I think ‘Axanar’ has become so popular that CBS realizes that we’re just making their brand that much better.”

The network will premiere a new “Star Trek” series on CBS All Access in January 2017, while Paramount will release the film “Star Trek Beyond” on July 22.

With the latest film in the “Star Trek” franchise, “Star Trek Beyond,” set to open July 22 and a new “Star Trek” TV series due next year, CBS and Paramount are attempting to walk a fine line: drawing sharp legal lines around their copyrighted intellectual property without alienating or antagonizing the diehard “Star Trek” fan community.

At a fan event last month for “Star Trek Beyond,” the film’s producer, J.J. Abrams – who directed the 2009 “Star Trek” big-screen reboot and its 2013 sequel – said that, for his part, he believes that such litigation is “not an appropriate way to deal with the fans.”

“The fans should be celebrating this thing,” Abrams said. “The fans of ‘Star Trek’ are part of this world.”

“I’ll tell you about the fan films in general.” Roddenberry said, when asked about the ongoing lawsuit between CBS/Paramount and Axanar Productions, by Matt Miller of TrekZone. “I, myself, am a huge supporter of fan film companies that are willing to follow the rules and do it right. CBS has been very gracious to — and I don’t know this from speaking to any of them — but it would seem that they have allowed certain fan groups to do things, as long as they do them correctly.” Roddenberry said.

“Ultimately, I’m a fan of the fans keeping Star Trek alive.” Roddenberry said. “The group that I’m really interested in right now is Star Trek Continues. Their writing, their costumes, their sets, their lightning — everything is spectacular. I’d say a lot of those episodes are as good and in some cases better than some of the original episodes.” he said of the celebrated fan series.

StarTrek.com has released a statement from CBS and Paramount about how they plan to move forward with Star Trek fan films in this, the year of Star Trek’s50th anniversary. Like the giant corporations who fear their own fandoms so often do, they’re basically shutting it all down.

All embedded fan films in this post are in violation of the new guidelines and rules.

One thought on “Star Trek: A Rising Tide of Frustrated Fans”