In 1965 A Charlie Brown Christmas premiered on the CBS network.  It was a huge success and was aired until 2000.  ABC Network picked it up and has aired it since.  It will air on Wednesday, November 28.

It would seem in 2012 that a 47-year-old cartoon would not be controversial.  However, it has become a center of controversy in Little Rock, Arkansas.

The cartoon has been made into a stage production.  A number of churches present this version each year.

The school officials at Terry Elementary planned a field trip to a local church (Agape) which would be presenting the play for the community.  If parents objected, then children could opt out of the field trip.

“We’re not saying anything bad about Charlie Brown.  The problem is that it’s got religious content and it’s being performed in a religious venue and that doesn’t just blur the line between church and state, it oversteps it entirely.”

From reading about this controversy the parents who objected do not want their children subjected to a religious environment such as a church.  The content of the play, like the cartoon, has Christmas songs and Scripture reading about the birth of Christ.

In addition they believe that if they openly oppose this and keep their children from attending, their children may be bullied and ridiculed—which is a poignant reality in this country. They and the Society want the school to maintain the separation of church and state as defined by the courts.

There is no way around it.  The cartoon and the stage play are overtly religious and are told from the Christian perspective.

The USA is a pluralistic country.  It is composed of people from many different faiths—Christian, Jewish, Muslim—representing an international religious spectrum.

At the same time there are many people like the Arkansas Society of Freethinkers who do not want religious dogma forced on them and their children.  In addition there are those who reject religion in all of its myriad manifestations.

To me the season represents opportunities for peace and harmony, sharing with those in need and being charitable to those who may see things differently.  I embrace the Christian tradition, especially as presented in the Gospels.

However, I have friends, associates and readers who do not share my views.  This is fine with me.  We all share the same planet traversing the cosmos.

I really like A Charlie Brown Christmas.  Its simple message is more needed now than in 1965.

If you watch it on November 28 or go to see the musical at a local church, enjoy.  If you don’t do so, it’s your decision, and you have the right in this country to choose what you and your children participate in during this season.

I hope we all will embrace the spirit of giving to those less fortunate than we.  Come January the season is behind us, but what we did for our fellow travellers on the road of life will have a lasting impact.

Charlie Brown and Snoppy by 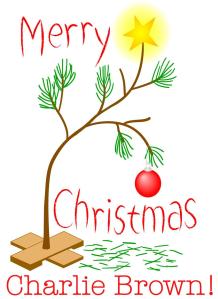 One thought on “A Charlie Brown Christmas: A Matter of Church and State?”