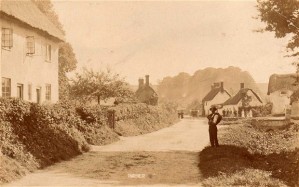 There are places in the world where life once thrived; children played; dogs barked and chased the occasional cat; people shopped and talked.  A village is more than a series of building.  It’s people—men, women and children.

Usually, an old village has a church which is the centre of community life.  If it is an old village, the kirk’s cemetery has family, friends, enemies and rivals with various stones marking the lives of those who trod the streets and lanes over the decades. Each grave has a story worth telling.

Of course you have the school where so many residents past and present received their education.  If one stood in the schoolroom and listened very carefully, perhaps those lessons taught would be heard in faint whispers from the years so long ago and so far away.

The corner butcher shop where one’s mom would go to buy those special choice cuts still echoes softly with those many mothers who bartered with the butcher for the best cut and the best price.  Of course the butcher loved the banter of his customers.

The local barber knew every one of the boys who would become men.  He visited the graves of his boys who went to war and came home.  Their lives were lost on foreign battlefields with strange sounding names.

The local blacksmith was in many ways a jack-of-all-trades.  He could shoe a horse or repair a bicycle.  The village was his heritage and pride.

All in all a village is a collection of events and people.  Without life the village is as barren as the moon.

On November 1, 1943 the people of Imber located on the Salisbury Plain, Wiltshire were called to the schoolroom where they were asked to make a sacrifice for the war effort.  Imber was to become a training ground for American troops for some secret military maneuver.

Saddened but patriotic the villagers gave up their village with the promise that they could return the summer of 1944.  They left provisions in their homes for the incoming Yanks.

Unfortunately, for reasons only known to the Ministry of Defence the people of Imber were not allowed to return to their homes.  Over the decades there have been valiant efforts to regain their heritage, but all efforts have been fruitless.

Imber has a rich history going to back the time of the Romans.  St Giles’ Church has stood there since the 13th Century with its limestone walls and rich cemetery of people, who lived, worked, played and grew old in the place they called home.

Imber was more than just a village to the people.  It was their home, their connection to their past, a reminder of their heritage. The loss of one’s heritage is a terrible thing. 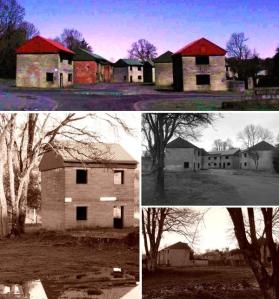 Home—what do you call home?  If your physical home and town were taken from you, how would you feel?  What is your heritage?  Your legacy?

Life on this planet traversing the cosmos proffers both challenges and opportunities.  Accept both and live well.

If you would like to support St Giles’ and Imber, the link is below.